Ohio State astronomers are coming together across space

Ohio State astronomers are coming together across space 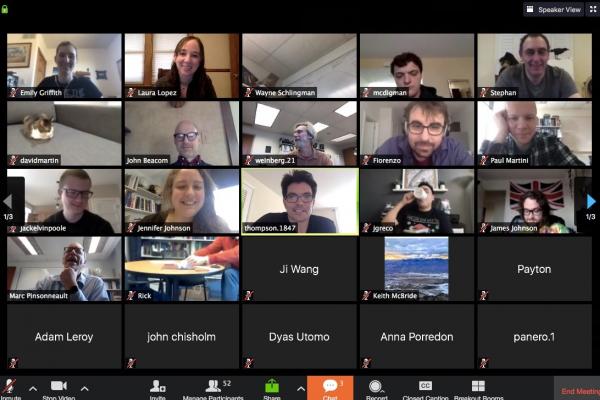 For 25 years, astronomy researchers at The Ohio State University have gathered daily at 10:30 a.m., filling a conference room, cradling cups of coffee, and ready to engage in some friendly-but-fierce debates about the latest discoveries in space.

Like so many other gatherings, that all changed last week, as the COVID-19 outbreak closed schools and businesses and government leaders pleaded for people to stay away from one another.

But AstroCoffee is not so easily stopped, even by a global health crisis.

And so, after a one-day hiatus, the leaders moved everything online.

Last week, astronomy faculty, students and researchers signed in to a video meeting from their homes across central Ohio.

And, in a weird pandemic perk, going online made it possible for people to join who normally can’t, including one alum in the Czech Republic.

“We’ve had several of the alumni ringing in, saying, ‘Wow, now I can finally be back,’” said John Beacom, a distinguished professor of astronomy and physics who leads AstroCoffee on Fridays. “It’s been a nice thing, to see those people able to join in again.”

Around 40 people might attend a typical AstroCoffee at McPherson Hall on Ohio State’s campus during normal times. Last Friday, more than 50 joined.

One was Wendy Panero, a professor of earth sciences who did a sabbatical in the Ohio State astronomy department during the 2015-16 academic year. Panero doesn’t typically attend AstroCoffee in person – her office isn’t in the astronomy building. But connecting over the internet made it easier for her to attend.

“I like that it’s helping to maintain a connection between people, which is something I really worried about for many of our students,” Panero said.

AstroCoffee has been, for decades, designed for human connection, even among the often-introverted scientists who attend.

Discussions typically cover the technical, sometimes arcane details of how we study space – the light curves of distant stars, the size of far-off planets, dark matter, supernovae, space dust. On Monday, the fourth day of remote AstroCoffee, topics included jellyfish galaxies and research that could help scientists search for new planets in the future.

“Coffee had to continue: It is an Ohio State institution and critical to our cultural identity,” said Todd Thompson, an astronomy professor and vice chair of the Ohio State astronomy department. “Surprises: People’s pets and kids are making appearances. That’s fun, especially in this time of uncertainty.”

The history of AstroCoffee at Ohio State is lengthy and well-known throughout the astronomy community. The discussions at AstroCoffee – like discussions in many of the best workplaces where people are passionate about what they do – can get “vigorous,” Beacom said. But they are almost always respectful. Other astronomy programs have tried to create similar discussion groups, but usually don’t have the same success.

“Lots of places have journal clubs and this is not a journal club. Normal journal club is like a normal book club: 10 people are assigned to read a book, only one person actually reads it, everybody shows up late, and people end up talking about something else,” Beacom said. “Astronomy coffee is like a successful book club.”

And while great science can happen in isolation – Isaac Newton made some of his greatest scientific breakthroughs, including the theory of gravity, while isolated during the Great Plague of London in 1665 – “the vast majority of scientists rely on one another to spark new ideas, learn new methods and in myriad other ways continue to explore,” said Paul Martini, an astronomy professor. “AstroCoffee is arguably the most important way we build community and collaboration at Ohio State, and I think it is awesome we are able to keep it going.”

If nothing else, the continuation of AstroCoffee is lending a small bit of normalcy to a time when things feel anything but normal.

“We all need to remain calm, and do our parts to help others and to help ourselves,” Beacom said. “And part of that is maintaining a sense of connection and community, even if we can’t be together in person.”