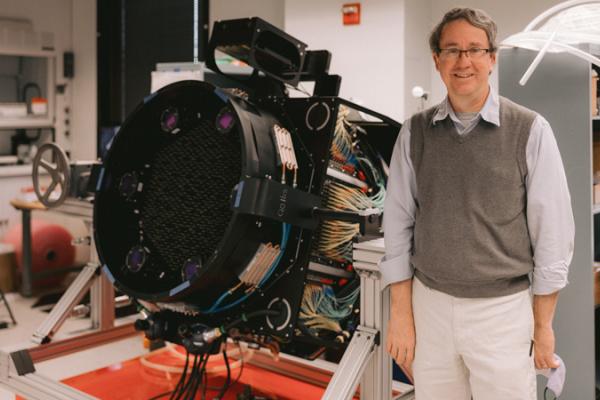 Richard Pogge of The Ohio State University describes the SDSS-V as “one of the most scientifically productive ground-based surveys ever.”

“I've derived a great deal of satisfaction out of knowing that instruments I've helped build have made it possible for many others to do their science,” says Richard Pogge. The College of Arts and Sciences Distinguished Professor of Astronomy at Ohio State University (OSU) is talking about working on the Sloan Digital Sky Survey-V (SDSS-V), the first dual-hemisphere, multi-epoch, optical and infrared astronomical survey providing multi-object and integral field spectroscopy across the Milky Way and other galaxies. "One big reason is SDSS makes their data public, which enables an enormous range of science by the community, often in areas the core project team never thought of."

Pogge, project lead of the Focal Plane Systems for SDSS-V, will be part of a plenary panel at SPIE Astronomical Telescopes + Instrumentation in Montréal discussing the project’s new instrumentation, including a new three-element, wide-field corrector for the SDSS 2.5m telescope; dual multi-fiber robotic focal plane systems; and a new facility with four small telescopes and three fiber-fed optical spectrographs for integral field observations.

What are some of your responsibilities as project lead for the SDSS-V robotic Focal Plane Systems?

My primary responsibility was to lead the robotic Focal Plane System (FPS) project from concept to deployment at the telescopes. I was brought into what became SDSS-V in 2017 when it was known as "AS4" for "After SDSS-IV," and tasked with fleshing out a basic white-paper level concept for replacing the famous SDSS hand-populated plug plates with a robotic fiber positioner system into something we could build.

Starting with the core built from OSU's astronomical instrumentation group, I recruited two key members of what became the international FPS team: the ASTROBOTS group at EPFL's Laboratory of Astrophysics who had critical expertise in fiber positioner robots, and the instrument group at the University of Washington who brought in optical fiber expertise I did not yet have at OSU. As the design advanced, we developed a number of critical industrial partnerships with makers of microprecision systems and optical fiber assemblies.

My main role in the SDSS-V collaboration was to be the interface between my instrument engineering team and the science leads in SDSS-V, translating science requirements into engineering requirements, shepherding the project through milestone reviews, coordinating with the observatory sites and their staffs, and working with the SDSS-V Central Project Office to keep everything moving on a limited budget and aggressive schedule so we could get two FPS units built and on the telescopes to start the science survey. Without the fiber robots, there wouldn't be a science survey, so we were in the hot seat for about five years from concept to deployment.

What are some of the changes and updates you’ve seen with SDSS-V since you joined the project?

The FPS systems represent a huge change in the way SDSS executes its spectroscopic surveys.  Instead of changing plug-plate cartridges eight or nine times per night, there is a single instrument on the telescope all the time. The whole infrastructure of cartridge swapping at the telescope at night, plugging and unplugging plates in the daytime, drilling plates, and shipping plates has become a thing of the past. This meant that in addition to the considerable engineering challenges of building the FPS units, we also had to navigate big changes in the operational culture of SDSS. We weren't just swapping out a plug plate for a robot array, it was a much bigger perturbation than we all imagined back when we started. Judging from the first season of observing this past year I'm confident we're making it work.

What are some of the challenges faced by the SDSS-V? How are they being met?

Beyond the inevitable technical challenges, not surprisingly the global pandemic was the biggest challenge. We had just passed Final Design Review (FDR) and were in the critical ramp-up of the build phase when the lock-down kicked us out of our labs, idled our industrial partners, and threatened to bring everything to a halt. However, we were able to get back on our feet pretty quickly.

We were already doing all our meetings on Zoom because of the geographic distribution of the FPS team, so we started by establishing regular communications. At OSU one of my instrument team members made his garage into a mini shipping-and-receiving office so we could keep orders flowing; we transferred work computers, and even parts of labs, to our homes. We had people doing prototyping in their basements, garages, and living rooms, and we had daily morning discussions on Zoom both to keep things moving, and, more importantly, check up on how everyone was doing.

I still marvel that not only did we not lose momentum, we actually found a way to make significant progress, so that when our labs finally did start opening up, we were able to hit the ground running. 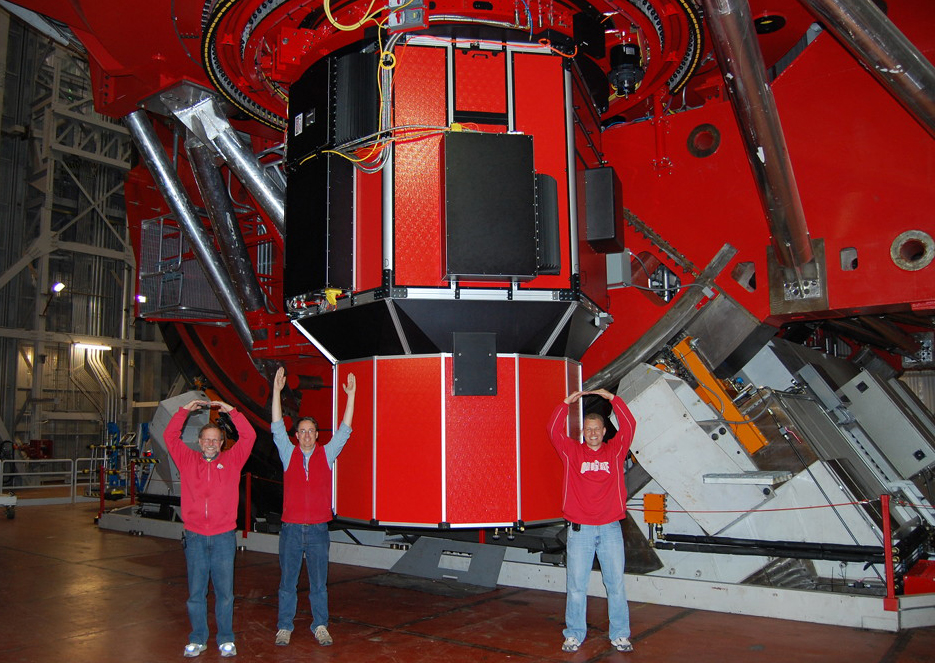 Richard Pogge and two lead engineers from his team in 2010 doing the traditional Ohio State OH-IO cheer at the Large Binocular Telescope with the first of the two Multi-Object Double Spectrographs (MODS) that the team built. Credit: Courtesy of Richard Pogge

How does the SDSS-V differ from its predecessors?

One big change for the spectroscopic surveys is that there will now be Baryon Oscillation Spectroscopic Survey (BOSS) and Apache Point Observatory Galactic Evolution Experiment (APOGEE) spectrographs in both hemispheres, and the FPS was designed to allow mixing BOSS and APOGEE targets together in a field visit, something never done before with plug plates. We will also have shorter field visits. Before, at most eight or nine plug plates could be used per night, which meant roughly hour-long visits per field.

With FPS we hope to observe three fields per hour, maybe a little better as we learn how to optimize field acquisition. Plug plates had to be pre-drilled for a particular set of targets or hour angles because you had to build-in apparent positions due to differential atmospheric refraction over the fields, but with the FPS you can dynamically tweak the configuration to extend the range of visibility of a field in an hour angle, and maybe even change some of the targets at the last minute. This gives the survey strategy teams enormously greater flexibility and is going to enable SDSS-V to take much more data per night than its predecessors, critical for achieving its ambitious science goals.

What are some of the aspects of this project that excite you the most?

The fact that making DSS data public helps the community engage in other science projects.

I'm an astronomer and spectroscopist who in addition to doing my own research, has spent most of my career designing and building facility instruments that are used by others. I've derived a great deal of satisfaction out of knowing that instruments I've helped build have made it possible for many others to do their science. The FPS systems combined with the public-data release ethos of SDSS is going to be a marvelous tool for exploring the universe.

SDSS-V is described as “the world’s first all-sky time-domain spectroscopic survey” How does this advance space mapping and space exploration?

The big difference with SDSS-V is that unlike its predecessor phases, and unlike every other massively multiplexed spectroscopic survey either in progress or planned, it is truly bi-hemispheric.  We will have the same systems — positioners plus spectrographs — in both hemispheres, and so will truly see the entire sky.  The recently published Astro2020 decadal survey report flagged massively multiplexed spectroscopy as one of the key enabling technologies of the coming decade.  SDSS-V is the first one that realizes this for the whole sky and is going to show the way forward.

What do you see as the future of space mapping and space exploration?

For ground-based astronomers, the original SDSS project is what taught us the power of well-designed, multiwavelength imaging and spectroscopic surveys to enable a wide range of science. It also established the enormous leverage to be gained by making those data sets open to the public and set the standard for how to create and curate deep, value-added public data sets. Next-generation, massively multiplexed surveys will be built on the lessons learned from the systems coming online now, and they will need these lessons to push into wider fields of view and larger numbers of fibers. We're just getting started.

What would you like attendees to the panel discussion to know/learn about the SDSS-V?

A lot of attention is being paid to the Extremely Large Telescopes that will be the flagships for ground-based optical and infra-red (OIR) astronomy of the 2030s and beyond. Understandably, they represent the bleeding edge of technology and the "big show" for many people who build astronomical instruments and telescope systems. However, there is still an enormous amount of science to be done with 2-to 3m-class telescopes, and SDSS-V is leading the way in showing how this can be done. A flagship isn't much of a flagship if it doesn't have a capable fleet sailing behind it.

The original article can be read on the SPIE website and is linked here.