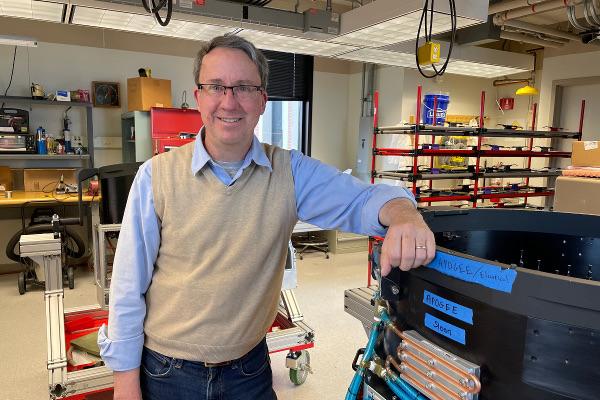 Richard Pogge (Rick) has been named a College of Arts & Sciences Distinguished Professor of Astronomy, recognizing his excellence in research, teaching, and service. Rick has been a member of the department since 1989 and contributed and led many projects as described below.

The external letters noted Rick’s contributions to science and to instrumentation projects over many years. These included his stewardship of the ISL in general, and his work on ANDICAM and SMARTS, MODS and the LBT, and the ISL’s current work on SDSS-V, among others. In noting these accomplishments, and as a testament to our exceptional ISL, one letter writer wrote that “I consider [OSU’s] to be the pre-eminent such [instrumentation] program of its size.” Another wrote that “Professor Pogge's accomplishments as a researcher, as a leader of the ISL, and his many contributions to the intellectual climate and scientific goals of the OSU astronomy department are all exceptional.” Rick’s contributions to research include his foundational work on Seyfert nuclei, his work on AGN reverberation mapping, his work in enabling gravitational microlensing experiments, and in his recent work obtaining precise chemical abundances for nearby star-forming galaxies with MODS.

Rick is also one of the astronomy department’s most accomplished and dedicated teachers, and is one who has done the most to support the entire department’s teaching program. Rick also has a huge role in running the department. As an example, he was responsible for all of our COVID shutdown and reopening plans over the last year. As his nomination letter stated, “In his three decades at Ohio State, Rick has excelled along every axis, as a researcher, as a teacher, and in service and public engagement. He puts enormous effort into his own work AND​ into enabling the research and teaching efforts of his colleagues and students.”

We are all very proud of Rick. Please join the department in congratulating him on this incredible honor.