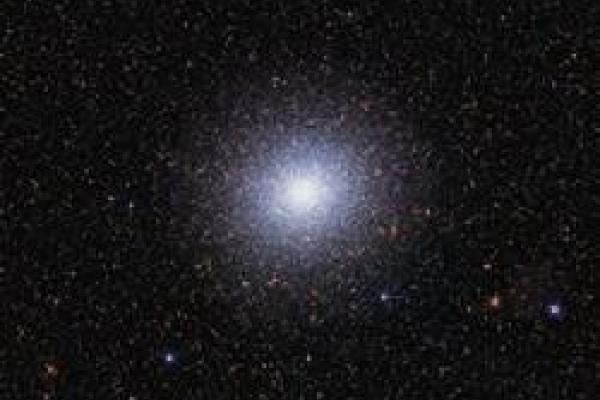 Well known for being the brightest and largest globular cluster in the Milky Way Galaxy, Omega Centauri is also considered one of the strangest.

Although Omega Centauri’s peculiarities have been a mystery to astronomers for many years, its differences have proven useful for undergraduate astronomy student Elizabeth Otto. Involved with Ohio State’s summer undergraduate research program (SURP) with Associate Professor Jennifer Johnson, Otto is looking for ways to better understand stellar nucleosynthesis – the process by which stars produce rare universal elements – by taking advantage of one of the most intriguing properties of Omega Centauri.

With thousands to tens of thousands of stars confined to a small enough region that neighboring stars often closely interact with one another, globular clusters portray a confined, alien environment from our relatively spacious Solar System. Observational evidence suggests that all of the stars in globular clusters form from the same cloud(s) of gas, which means the stars not only are composed of the same chemical elements, but they formed on roughly the same time scale, as well.

While most globular clusters in the Milky Way consist of stars with nearly the same age, Omega Centauri poses an intriguing exception. The cluster’s stars have a variety of different ages and chemical compositions, which presents a useful candidate for studying the formation of elements like carbon and oxygen, that may not be important to a star’s survival but are a vital contribution to life on Earth, Otto explained.

“We are particularly interested in observing binary systems – a pair of stars that are gravitationally bound to one another – within Omega Centauri,” remarked Johnson. “The binary systems of this globular cluster are unique because their proximity to each other is very close compared to other systems,” she continued.

“During a certain stage of stellar evolution, the star’s atmosphere expands to a great distance from the inner core and can be transferred to the orbiting companion star. At the same time of the expansion, the star is undergoing an intense period of nucleosynthesis,” Johnson explained.

The amount of carbon, oxygen, and other complex elements a star produces during this period of atmospheric expansion may very well depend on whether the star is in a binary system, or not. If the companion star pulls on the expanding star enough, this could halt nucleosynthesis prematurely. Moreover, if the distance between the two stars is very close, the companion will attract more of its partner’s mass gravitationally, thus interrupting heavy element production sooner.

“The fact that binary systems within Omega Centauri tend to be closer together than other binary systems allows us to have a sort of extreme example to study this important possibility,” explained Johnson.

Otto is currently measuring the abundance of various elements within her sample of stars. This tedious work takes time and care, but Otto’s efforts will prove extremely valuable upon scientific analysis.

“My sample has around 50 some stars, of which I measure the different types of chemical elements present in each star individually,” said Otto. “Right now, it takes me a day to finish analyzing one star, but I hope to become faster and more adept to the work as I continue,” she added.

In addition to participating in Ohio State’s SURP, Otto has participated in a similar ten week program at both NASA’s Jet Propulsion Laboratory and Harvard University during the summers of 2009 and 2010 respectively.

“I learned a great deal from my experiences at NASA and Harvard, and I’m also learning just as much with my project at Ohio State,” Otto acknowledged. “For example, working with all of these different chemical elements has vastly expanded my knowledge of the periodic table. Who knew that praseodymium was an element?" she said with a laugh.

Otto intends to continue her education in graduate school for astronomy after she graduates with her Bachelor’s Degree in Science during spring of 2012.