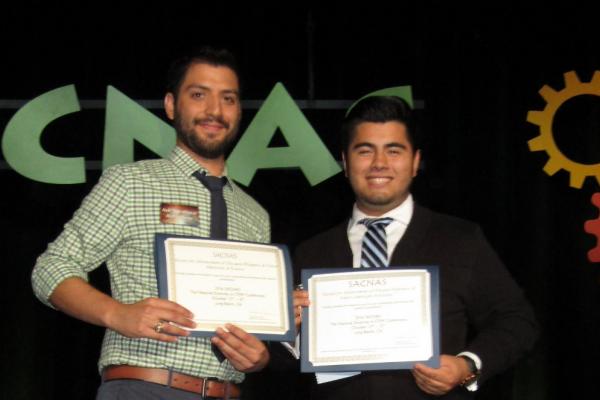 Astronomy graduate student Steven Villanueva Jr. won the graduate student award for best oral presentation in Physics and Astronomy at the 2016 Conference of the Society for the Advancment of Chicanos/Hispanic and Native American Scientists (SACNAS). Steven was one of 22 representatives from Ohio State's SACNAS Chapter who traveled to Long Beach, CA for the conference. He presented his work on the robotic DEMONEXT telescope, a telescope that measures precise information about exoplanets that transit in front of their host star.

Ohio State undergraduate aerospace engineering major WIlson Flores won the undergraduate poster award in Engineering for his work on airport runway and taxiway lighting improvements. This is the third straight year that OSU SACNAS attendees have won two student presentation awards, and the second year that Steven has won an award at the conference.