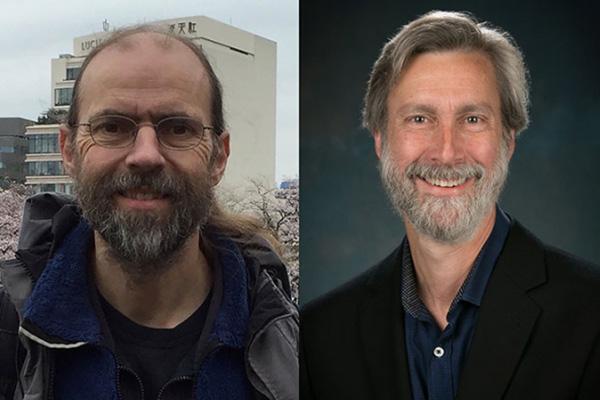 The Department of Astronomy at The Ohio State University congratulates David Weinberg as one of the recipients of the 2021 Dannie Heineman Prize for Astrophysics recognizing outstanding mid-career work in astrophysics.

The American Institute of Physics, the American Astronomical Society, and the Heineman Foundation proudly announce Robert Lupton and David Weinberg as recipients of the 2021 Dannie Heineman Prize for Astrophysics. The award is given annually to recognize outstanding mid-career work in any area of astrophysics.

The Heineman Prize committee selected the two recipients “for their essential contributions to facilitating, guiding, and participating in transformative science resulting from modern large-scale astronomical surveys at optical wavelengths, in particular the Sloan Digital Sky Survey.”

“It is a huge honor, bolstering and humbling at the same time,” Weinberg said. “The most satisfying part of winning this award is to read the list of previous winners, an extraordinary group of scientists. The list includes my Ph.D. thesis advisor, Jim Gunn, who was also Robert Lupton's thesis advisor. Jim won the Heineman Prize when I was in graduate school, and the project that would become the Sloan Digital Sky Survey (SDSS) was still just a gleam in Jim's eye.”

“Winning the Heineman Prize means a lot to me, because I mostly think about instrumentation and software, which is critical to extracting science from modern data, and I feel that it tends to be treated as service work that anyone could do if they just turned their mind to it,” Lupton said. “So being awarded the Dannie Heineman Prize along with David Weinberg feels like a recognition of the essential contributions made by the talented teams with whom I have worked over the years."

Weinberg is currently the chair of the astronomy department and a distinguished professor at the Ohio State University. His research areas include cosmic acceleration and dark energy, large-scale structure, galaxy formation, the intergalactic medium, and the chemical evolution of the Milky Way.

Lupton is a senior researcher at Princeton University and pipeline scientist at the Vera C. Rubin Observatory, currently under construction in Chile. The observatory is being built to rapidly survey the night sky with its large mirror and large field of view -- almost 10 square degrees, or 40 times the apparent size of the full moon -- to deliver more light from faint astronomical objects than any optical telescope in the world. In his spare time, Lupton works on the new fiber spectrograph being built for the Subaru telescope in Hawaii.

“Congratulations to David and Robert on being awarded this prize for their groundbreaking work with SDSS,” said Michael Moloney, CEO of AIP. “Surveys of the sky play a complementary role to observations of specific astrophysical targets by allowing us to understand the dynamic universe in which we live. I am delighted to see astronomers of David and Robert’s caliber being recognized with this 2021 award.”

“I am very happy to see the Heineman prize go to two such deserving people,” said AAS President Paula Szkody. “The SDSS played an important part in my own research in stellar astronomy, and I well remember the detailed work that Robert put into the reliability of the photometric measurements and data processing as well as David's groundbreaking results on the Milky Way. They showed to the world how important and far-reaching sky surveys can be.”

Both researchers praise the SDSS as a project that has dramatically expanded astronomers’ knowledge about asteroids, stars, galaxies, quasars, and the largest structures in the universe. The award recognizes the different contributions both men made toward the SDSS and its ongoing mission of delving further into the universe. Since making its first observations in 1998, the project has been through a number of multiyear phases, each with distinct scientific objectives.

Lupton spent many years on the SDSS, working at Apache Point Observatory in New Mexico to make the camera and telescope function, as well as handling and interpreting the data and developing the most critical and challenging components of the software needed to analyze its unprecedented volume of imaging data. Weinberg joined the project as a postdoc in 1992 and has made a variety of technical and organizational contributions, including serving as the spokesperson of SDSS-II from 2005 to 2008 and the project scientist of SDSS-III from 2008 to 2014.

“The topics that I was most directly involved with were the identification of luminous red galaxies, which were used to measure baryon acoustic oscillations, and the identification of the most distant objects known in the universe,” Lupton said. “These projects were very satisfying, requiring a small team of colleagues to understand everything from the detectors to the science.”

Weinberg’s early work with the SDSS concentrated on the clustering of galaxies and its implications for cosmology. More recently, he has shifted his focus closer to home.

“These days, the biggest component of my SDSS research is understanding the nucleosynthetic origin of the chemical elements and the history of the Milky Way, both relatively new subjects for me,” he said. “Part of what I enjoy about being in a survey collaboration is that it draws me into science areas I might never have explored otherwise, and it allows me to collaborate with world experts in those areas.”

Weinberg and Lupton were quick to praise each other for work with the SDSS, but their collaboration was rooted early in their academic lives. They had the same thesis advisor during their individual times at Princeton (“We’re academic brothers,” Lupton said), and came together during the early days of the SDSS.

“I had the chance to work with David as we transitioned from the ‘just make it work’ to the ‘extract the science’ phases of the SDSS project,” Lupton said. “Our interests and skills overlap but aren't the same, which makes for a good partnership. And we have fun working together!”

“Robert is an algorithm and software genius, and the SDSS could not have happened without him,” Weinberg said. “In many ways, Robert and I are a study in contrasts. Pairing us for the Heineman Prize was an inspired choice, because it illustrates the wide range of talents and outlooks that are needed for a project like the SDSS to succeed.”

The current phase of the SDSS survey started last summer and encompasses the entire sky, yielding optical and infrared spectra of over 6 million objects during its five-year lifetime, mapping the Milky Way, nearby galaxies, and black holes. It is future observations and research that keep both scientists looking to the skies and beyond.

“I would love it if astronomy leads to yet another staggering breakthrough in fundamental physics, on par with the discoveries of dark matter and cosmic acceleration,” Weinberg said. “But one thing I have learned from 35 years in astronomy is how fabulously rich it is. New instruments or new theoretical methods can revitalize a subject that might have seemed sleepy for a couple of decades, and new subjects can emerge almost out of the blue.”

“I'm interested in understanding how galaxies formed and evolved,” Lupton said. “The prime-focus spectrograph that we're building for the Subaru telescope in Hawaii promises to answer some questions and ask others. Technically, it is a fascinating challenge, and I have some cunning ideas I'd like to try out.”

Lupton and Weinberg will receive their award at an upcoming AAS meeting and are invited to speak at the conference. They will each received a certificate and split a $10,000 award.

ABOUT THE HEINEMAN PRIZE

The Heineman Prize is named after Dannie N. Heineman, an engineer, business executive, and philanthropic sponsor of the sciences. The prize was established in 1979 by the Heineman Foundation for Research, Education, Charitable and Scientific Purposes, Inc. Awarded annually by the AIP and the AAS, the prize consists of $10,000 and a certificate citing the contributions made by the recipient(s) plus travel expenses to attend the meeting at which the prize is bestowed. https://www.aip.org/aip/awards-and-prizes/heineman-astro

The American Institute of Physics (AIP) is a 501(c)(3) membership corporation of scientific societies. AIP pursues its mission to advance, promote, and serve the physical sciences for the benefit of humanity with a unifying voice of strength from diversity. In its role as a federation, AIP advances the success of its Member Societies by providing the means to pool, coordinate, and leverage their diverse expertise and contributions in pursuit of a shared goal of advancing the physical sciences in the research enterprise, in the economy, in education, and in society. In its role as an institute, AIP operates as a center of excellence using policy analysis, social science, and historical research to promote future progress in the physical sciences. https://www.aip.org

The American Astronomical Society (AAS), established in 1899 and based in Washington, D.C., is the major organization of professional astronomers in North America. Its membership (approximately 8,000) also includes physicists, mathematicians, geologists, engineers, and others whose research and educational interests lie within the broad spectrum of subjects comprising the astronomical sciences. The mission of the AAS is to enhance and share humanity's scientific understanding of the universe, which it achieves through publishing, meeting organization, science advocacy, education and outreach, and training and professional development. https://aas.org