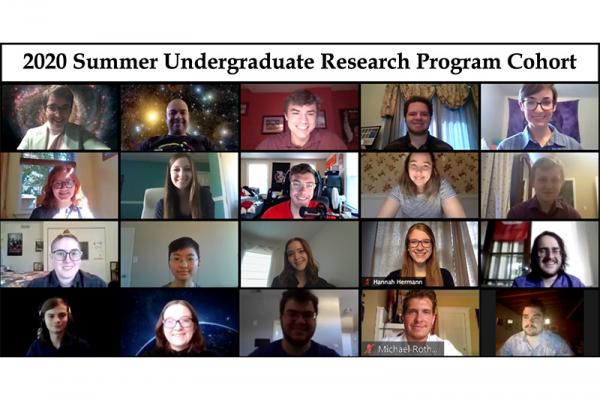 This summer, the OSU Department of Astronomy hosted 18 students for the Summer Undergraduate Research Program (SURP). These students conducted astronomy research projects that were performed online under the guidance of OSU faculty and post-doctorate mentors. On Tuesday, July 28, they presented their work during our end-of-summer Online Research Symposium! 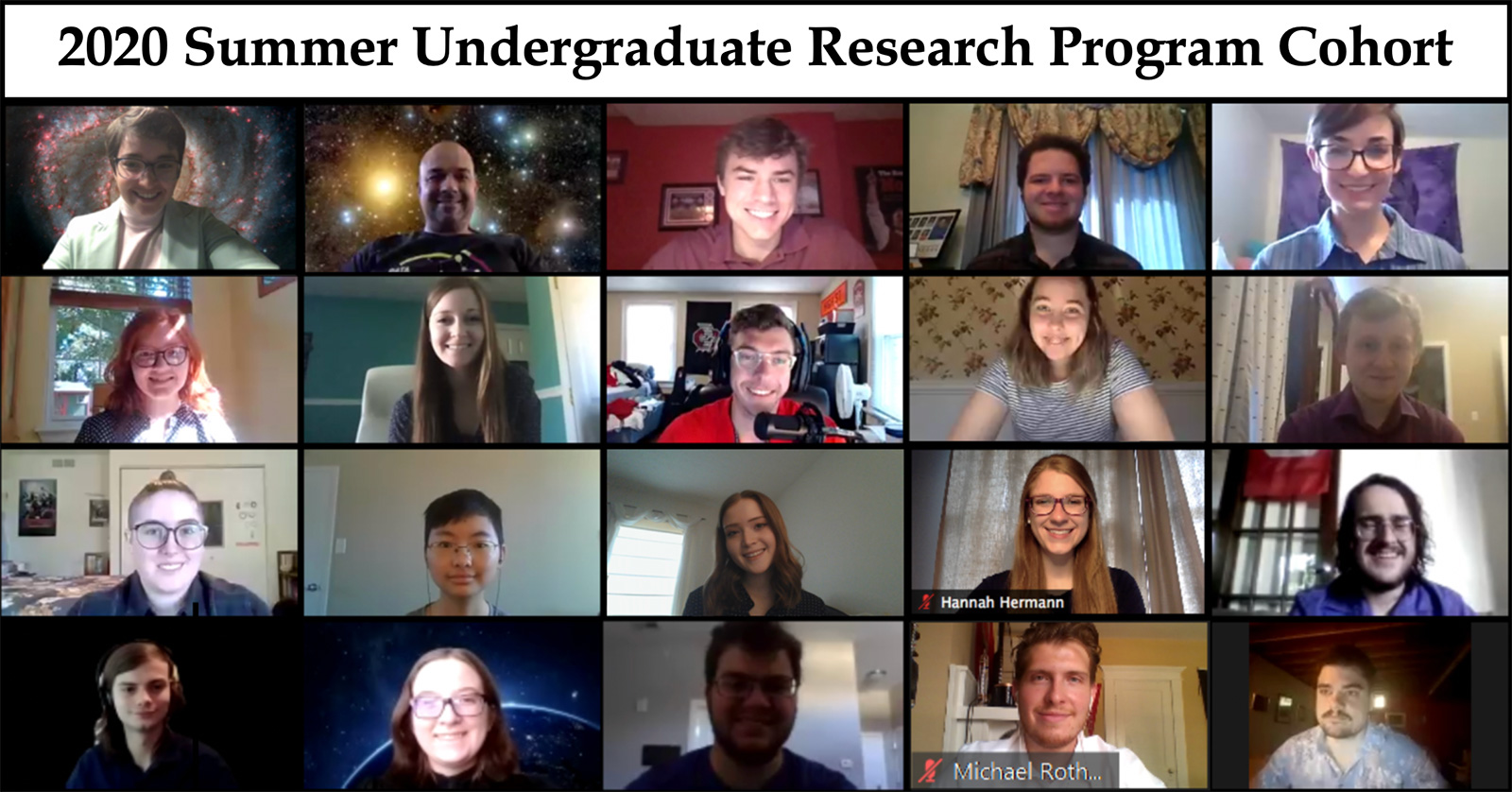 Maria Pudoka
Kim et al. (2016) searched for field stars with significant distance errors derived from Hipparcos parallaxes, such as those for the Pleiades cluster, by looking for stars that appear sub-luminous for their metallicities. No such stars were found, but about 10% of the sample stars are likely young (&lt; 500 Myr) as indicated by lithium absorption lines. We reanalyzed the spectra from the prior study to measure rotational velocity (vsini), and we compute space motions using Gaia data. The goal is to determine whether stars with indications of youth have the cold kinematics and rapid rotation expected for young stars. Mentored by Professor Donald Terndrup.

Luca Schmitt
Broad absorption lines are present in about 20% of quasars. These broad absorption lines indicate high speed outflows from the quasars’ central black holes. SimBAL is a new spectral synthesis code in development as part of a collaboration including OSU and the University of Oklahoma, which will be used to derive physical properties in the outflows by matching theoretical and observed spectra. This presentation will discuss the components of SimBAL and outline plans for improving the code during work planned in the upcoming academic year. Mentored by Professor Donald Terndrup.

Miqaela Weller
Using COSMIC, a binary population synthesis code that generates and evolves realistic binaries, we can predict the number of massive stars with significant radial velocity variations, thus indicating a potential compact object (i.e. a black hole or neutron star) orbiting the star. The gravitational wave event GW150914 detected by the LIGO Labs highlighted the need to determine how these kind of systems are formed. We will further analyze APOGEE/APOGEE-2 data, specifically a list of hot O and B stars, taken to remove telluric absorption from the Earth's atmosphere, to see if there are any possible candidates to become such a system. Mentored by Professor Jennifer Johnson.

Alpha/Fe Trends in SDSS Data: the Effects of Star Formation History and Type 1a Supernovae

Jacob Krebs
Motivated by Sloan Digital Sky Survey (SDSS) data, we investigated trends in alpha/m vs age to determine if the timescale of type 1A supernovae supports these trends or if galaxy star formation history is the predominant driving force of features detected in the data. We used 10 simulated galaxies from Dr. Fiorenzo Vincenzo with the same type 1A supernova timescale parameters. This talk will present the various differing behaviors that were observed in alpha vs age. Mentored by Professor Jennifer Johnson, Professor Marc Pinsonneault, and Dr. Fiorenzo Vincenzo.

Lily Loyer
This project is a search for unusual red giant branch (RGB) and red clump (RC) stars on the Kepler field. Using the APOGEE dataset, I developed the technique of defining the bottom edge of the red clump seismically in order to look at a hot population and a cool population of stars spectroscopically. Their light curves were then further analyzed to produce results that show that these two samples have different astrophysical properties, confirming the constraints chosen to be valid. Mentored by Professor Marc Pinsonneault and Dr. Mathieu Vrard.

Devin Bennett
Asymptotic Giant Branch stars can appear very similar to the more numerous Red Giant Branch stars and are often mis-classified as such. This project used an algorithm to determine the reference temperature for a population of Giant stars, which were then compared against an evolutionary model. This method produces favorable results when compared with other classification methods. Mentored by Professor Marc Pinsonneault and Dr. Mathieu Vrard.

Active Galactic Nuclei and the Correlated Properties of Neighboring Galaxies

Robert Von Holle
When a galaxy’s central supermassive black hole is actively accreting matter, it becomes known as an active galactic nucleus (AGN). A statistical analysis of a large sample of galaxies and their nearby neighboring galaxies was performed to determine what properties of nearby galaxies correlate to higher probabilities of finding AGN. Results of this analysis indicate that the probability of finding an AGN in a target galaxy may inversely correlate to the number of galaxies within half a megaparsec of that target. This presentation will discuss how this data was collected, the project results, and how this research can be continued. Mentored by Professor Barbara Ryden.

Hannah Hermann
Galactic Archeology is a rapidly developing field that seeks to effectively ‘unspin’ galaxies by developing models that reproduce observational data and the formation history of those galaxies. Here, we present a developing chemical evolution model for elements produced via neutron capture (e.g. Ba, Sr), which mainly occurs in the envelopes of low- to intermediate- mass stars in the Asymptotic Giant Branch phase. Modeling the abundances of these elements may be particularly useful for developing models of galaxies with bottom-heavy IMFs, such as elliptical galaxies. The Versatile Integrator for Chemical Evolution (VICE) was used in this effort. Mentored by Dr. Fiorenzo Vincenzo.

Michael Winfield
Using the WISE Survey, an infrared full sky survey in 4 bands, this project used an approach called clustering redshift to map out the redshift distribution of galaxies and AGNs using their location in the cosmic web. Sources are grouped together based on their photometric information (mainly color and magnitude) and then redshift distribution is mapped out for these sources. Mentored by Dr. Yi-Kuan Chiang.

Accessible Astronomy Outreach: SciAccess 2020 and Beyond

Michaela Deming
While many members of the public are interested in astronomy, the subject is often perceived as prohibitively challenging to learn. Barriers to astronomy access and engagement are especially prevalent for students and members of the public with disabilities. This summer, I worked on astronomy outreach efforts to reach a wide array of audiences, with particular focus on disability inclusion. These efforts culminated in the SciAccess 2020 Conference, held on June 29. I will present on my work preparing for SciAccess 2020, as well as next steps for SciAccess 2021 and further outreach efforts planned for this fall. Mentored by Anna Voelker.

Recreating the Origins of the Elements Planetarium Show

Jessica Kulp
From Big Bang nucleosynthesis to supernovae, the elements in our universe have many interesting origin stories to tell. This presentation will outline the process of creating a planetarium show for middle & high school students which investigates these complex origins. Thus far, the project has focused on developing the show’s narrative and visuals to most effectively educate and engage the students. This process included creating a highly detailed storyboard of the show, with a script, graphics, and numerous educational animations. The goal of this project is to have Origins of the Elements ready for public presentation in the upcoming spring semester. Mentored by Professor Rick Pogge and Dr. Wayne Schlingman.

Collin Christy
Citizen ASAS-SN is a citizen science project that allows volunteers to identify potential variable stars using new g-band data from ASAS-SN (All Sky Automated Survey for Super Novae). Users of this project will be shown light curves along with helpful statistics in order to classify countless stars. This presentation will discuss the various features and details of this project including the creation of the classification workflow, field guides, and tutorial. Additionally, this talk will discuss the future goals of Citizen ASAS-SN and continued community engagement efforts. Mentored by Professor Kris Stanek and Tharindu Jayasinghe Arachchilage.

Mitchell Halley
Using data from the Chandra X-Ray Observatory, this project used a sample of just over 200 observations of galaxies to identify possible Active Galactic Nuclei (AGN) in the x-ray band. This was done through the use of the “Chandra Interactive Analysis of Observations” (CIAO) software and by analyzing at extracted spectra from the source object. 93 objects out of 207 were detected. Mentored by Professor Smita Mathur and Sanskriti Das.

Yuanyuan Yang
Lyman alpha emission is one tool we have to learn the epoch of reionization (occurring at z ~ 8). This project aims to make a model of polarized Lyman alpha emission from a single plane-parallel model of an ionization front. This includes generating, propagating, and scattering Lyman alpha photon processes, and will predict the final status, especially the intensity and polarization of Lyman alpha radiation. Looking forward, we want to extend this to a cosmological simulated ionization front. Mentored by Professor Christopher Hirata.

Michael Rothman
Development is underway for an exoplanetary atmosphere simulator, Geant4-EXOP. This is based on the multi- purpose Monte Carlo program package Geant4, which enables modeling transmission of radiation and particles through matter. Geant4-EXOP will provide a toolkit to model the transmission of host-star radiation through atmospheric layers, such as the ionosphere, to provide insights into atmospheric composition when compared with observational data. Precise measurements of atomic transmission energies, probabilities, and opacities are obtained through Superstructure for accurate atmospheric modeling. Calculations for numerous atoms and ions will be executed, and sample results for phosphorus ions are compared with experimental values to calibrate and validate Superstructure results. Mentored by Professor Anil Pradhan, Professor Sultana Nahar, and Dr. Bilal Shafique.

Jared Kolecki
In the search for exoplanets, knowing what types of stars can even support planet formation is an important part of deciding which stars should be given target priority. One of the properties that has been shown to correlate  with planet formation is stellar metallicity. In order to help extend the correlation further to the lower limits of stellar metallicity, we used spectral data taken from the Large Binocular Telescope (LBT) to determine elemental abundances, effective temperatures, and surface gravities of several low-metallicity galactic halo stars. Mentored by Professor Ji Wang and Professor Jennifer Johnson.

Melissa Mikalsen
During the accretion process of terrestrial planet formation, core and mantle compositions are primarily determined by metal-silicate differentiation. Compared to Earth, Super-Earths have greater core pressures. Furthermore, as compositions vary, planets form from materials with variable amounts of critical components, including Mg, Si, Fe, and O. Here, metal (Fe)-silicate (MgSiO3) partitioning is modeled with two-phase, molecular dynamics simulations using density functional theory (DFT), at pressures between 70 and 80 GPa and temperatures of 4,000K and 5,000K. Using speciation analysis tools, the partitioning of Fe and Si is found. The results, crucial to interpreting planetary structure, indicate that the residual iron in the mantle and silicon in the iron core are affected by temperature variations. Mentored by Professor Wendy Panero.

Searching for the Next Tatooine: Identifying Circumbinary Planets with TESS

Evan Fitzmaurice
Identifying circumbinary exoplanets – planets orbiting binary star systems – comes with added layers of complexity that single-host exoplanets lack. Binary eclipsing, orbital inclinations of both the binary and the planet, and background from nearby stars all present challenges when trying to locate a circumbinary planet. We are creating a program that will download and clean TESS light curves and then automatically detect any transiting planets. The program automatically cross-references known binary system data from surveys such as GAIA, ASAS-SN and EBLM to remove eclipses and aid in planet detection. Mentored by Dr. David Martin.