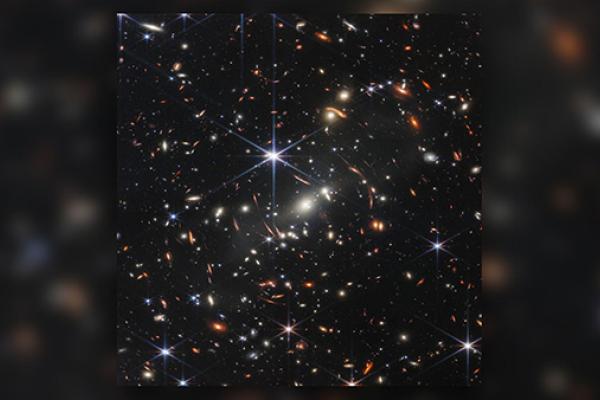 On July 12, NASA shared the debut images from the fully operational James Webb Space Telescope (JWST) — the most powerful space observatory ever built.

Among the close-ups of cosmic cliffs and stellar fireworks was an impossibly detailed image known as Webb's first deep field. Brimming with shimmering stars, warped light trails and thousands upon thousands of gem-like galaxies twinkling against the darkness of space, the picture has been touted as the deepest image of the universe ever taken.

"You start looking at this image and realize there's no blank sky," Scott Gaudi, a professor of astronomy at Ohio State University, told Live Science. "There's something crazy happening everywhere."

To try and understand this historic image a little better, we asked Gaudi to walk us through the big, small, and strange details of Webb's deep field. 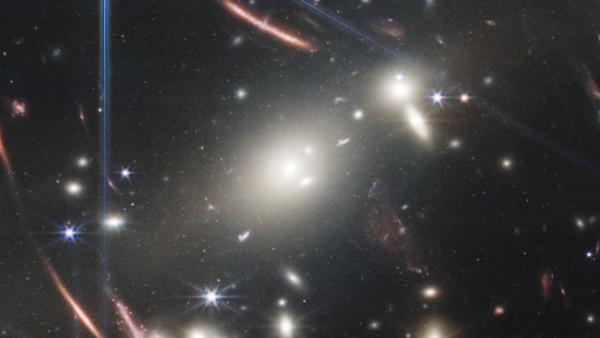 An enormous galaxy cluster "spews out" a haze of white stars as multiple galaxies collide in the center of JWST's deep field image. (Image credit: NASA, ESA, CSA, and STScI)

Let's start with the galactic elephant in the room: the colossal galaxy cluster at the center of the image.

The focal point of Webb's deep field image is a large, bright cluster of galaxies known as SMACS 0723, which sits about 4.6 billion light-years from Earth — meaning the light we see here was emitted shortly before our planet formed. You can see the cluster as a series of bright spots of light at the center of the image, surrounded by a smudgy white halo of more diffuse starlight.

Galaxy clusters are some of the largest gravitationally bound structures in the universe, containing hundreds to thousands of individual galaxies all glommed together. The brightest spots of light at the center of the image represent some of those larger galaxies — several of which appear to be actively merging together, Gaudi said.

Those spewed stars — which likely number in the millions or even billions, and aren't gravitationally bound to any of the galaxies within the cluster — create a white haze known as intra-cluster light.

JWST shows us this light in clearer detail than ever before, adding evidence to a long-held theory that galaxy clusters store a good chunk of their mass in these intra-cluster regions, Gaudi said. 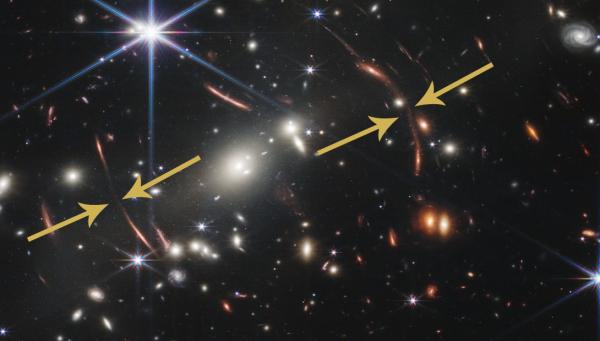 Mass is precisely what makes SMACS 0723 such a good target; this galaxy cluster is so massive, it warps the light of stars and galaxies located billions of light-years behind it (relative to our view from Earth). That leads to the next key feature of the JWST deep field image — gravitational lensing.

"Probably the next thing that will catch your eye are these weird, worm-shaped arcs that are sort of emanating from the center of the image," Gaudi said. "These are background galaxies that are sitting behind the foreground cluster. Once their light hits the cluster, the cluster mass bends that light and creates what's known as a gravitational lens."

Like the cosmic combination of a magnifying glass and a funhouse mirror, gravitational lenses both warp and magnify the light of background galaxies. If you imagine the center of this image as a clock, you can clearly see two such background galaxies sitting between 2 and 3 o'clock, and 7 and 9 o'clock, respectively.

Both of these galaxies appear as bright, orange, curving lines that wrap around the central galaxy cluster. They seem incredibly long — longer even than the massive central cluster — because their light is being magnified so dramatically. Despite their large and looming appearance, the galaxies are in reality more than 13 billion light-years away, Gaudi said — potentially making them some of the oldest observable galaxies in the universe. 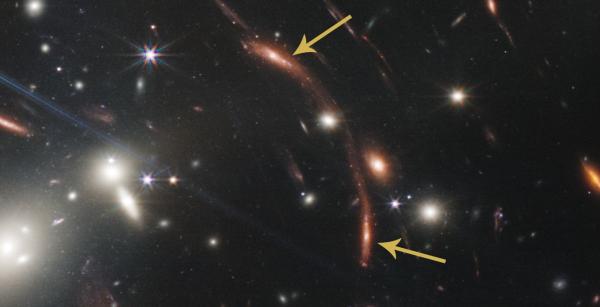 Light from one of the earliest galaxies in the universe is warped, magnified and mirrored by the extraordinary mass of galaxy cluster SMACS 0723. (Arrows denote mirror image.) (Image credit: NASA/ ESA/ CSA)

But the central cluster's mass isn't just magnifying these ancient objects — it's also doubling them. Look a little closer and you'll see that both of the warped orange lines are brighter around the edges and dimmer at their centers. Look even closer at either one of the orange lines and you'll see that the two bright regions are actually perfect mirror images of each other.

That's a telltale byproduct of gravitational lensing, according to Gaudi — one galaxy, split into multiple images that curve around the same center of mass.  Gaudi added that almost every warped-looking object on display here has a mirror image somewhere else in the field. 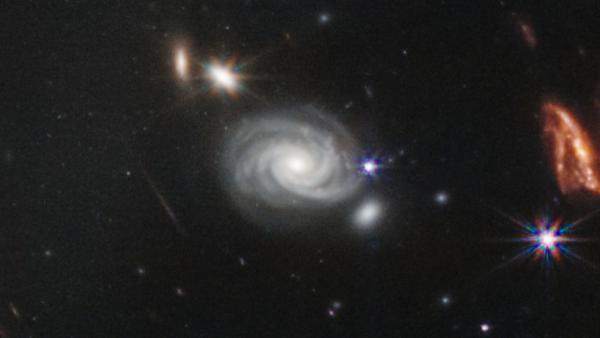 A perfect spiral galaxy swirls off to the side of the central galaxy cluster. Looks just like home! (Image credit: NASA, ESA, CSA, and STScI)

Studying the oldest light in the universe is one of NASA's key objectives for the JWST. But, as this image shows, the powerful telescope can't look back in time without thousands upon thousands of younger, closer galaxies photo-bombing the frame.

In general, the big, bright, six-pointed objects in the foreground of the image are stars. Almost everything else you can see is a galaxy or cluster of galaxies, Gaudi said.

These galaxies come in two major varieties. Look right of the bright star at the image's center and you'll see a perfect spiral galaxy, just like our own Milky Way. Spiral galaxies are active, star-forming galaxies, Gaudi said, and they tend to be filled with hotter, younger stars that glow in whitish-bluish light.

Look a bit above and to the left of that spiral, and you'll see the other dominant type of galaxy in our local universe: a fiery orange elliptical galaxy. 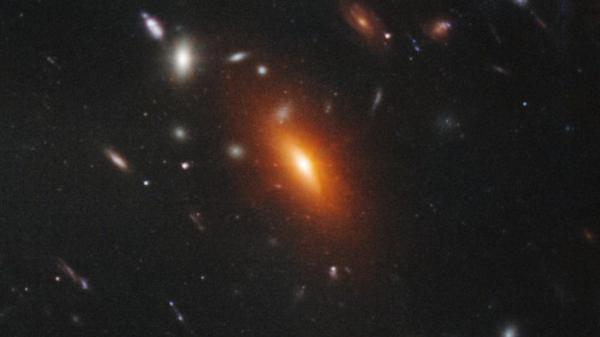 Orange elliptical galaxies like this one are predominantly made of old, dead stars. (Image credit: NASA, ESA, CSA, and STScI)

"Elliptical galaxies are kind of dead," Gaudi said. "They've already formed all of their stars. The massive blue stars die off first, and you're left with the old red stars."

Generally, the bluer galaxies in this image are younger spiral galaxies, while the redder galaxies are old, dead elliptical galaxies.

However, a galaxy's color can also be altered by its distance from the telescope, thanks to a phenomenon called redshift. Basically, as light travels across the vast and expanding universe, its wavelength gradually increases with distance, turning redder and redder over time. So, some of the red and orange galaxies in this image are actually ancient background galaxies whose light has been redshifted on the way to JWST's lens.

Estimating the ages of the thousands of objects peppered throughout this image is just one of the exciting challenges awaiting scientists. And the longer the researchers look at the deep field, the more weird and wonderful things they'll turn up. 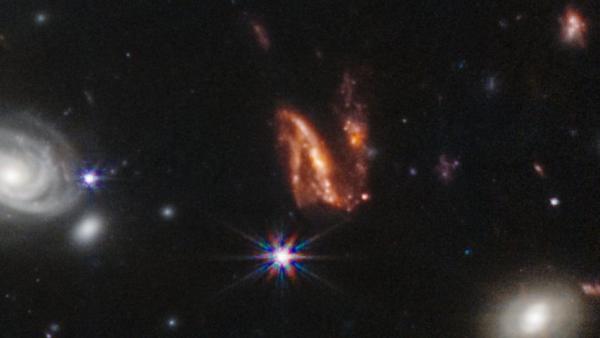 For example, Gaudi indicated an orange N-shaped galaxy zigzagging just to the right of the perfect spiral galaxy, seemingly warped and twisted by an intense cosmic collision. Gaudi dubbed this the "merger train wreck galaxy" for its chaotic and jumbled appearance.

With the first images just days old, and more than 20 years of fuel waiting aboard the JWST, the discoveries have only just begun. We hope you enjoy getting lost in space.

The original article can be found here.