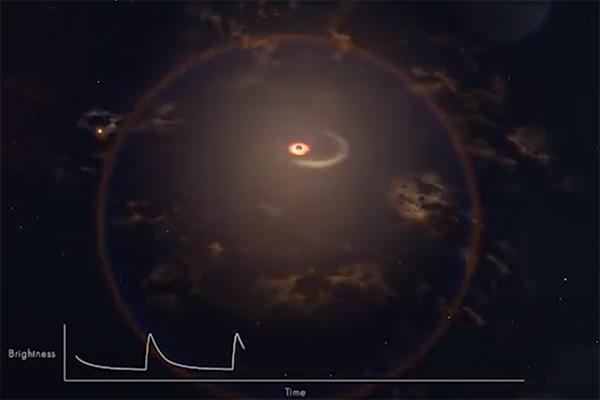 You’ve heard of Old Faithful, the Yellowstone National Park geyser that erupts every hour or two, a geological phenomenon on a nearly predictable schedule.

Now, an international group of scientists who study space have discovered an astronomical “Old Faithful” – an eruption of light flashing about once every 114 days on a nearly predictable schedule. The researchers believe it is a tidal disruption event, a phenomenon that happens when a star gets so close to a black hole that the black hole “rips” away pieces of the star, causing the flare.

The team made the discovery using data from NASA and from a network of telescopes operated by The Ohio State University.

Their findings, presented today at the American Astronomical Society’s annual meeting and to be published in The Astrophysical Journal, are the first clear examples of regular flares erupting from a galaxy’s core. The study is available on a pre-print server.

“It’s really exciting, because we’ve seen black holes do a lot of things, but we’ve never seen them do something like this – cause this regular eruption of light – before,” said Patrick Vallely, a co-author of the study and National Science Foundation Graduate Research Fellow at Ohio State. “It’s like an extra-galactic Old Faithful.”

The flare is coming from the center of a galaxy in our southern skies, about 570 million light years away. When scientists have witnessed tidal disruption events in the past, they have essentially seen the star destroyed.

But in this case, scientists think the star is circling around a supermassive black hole, getting closer, then zooming away again. As the star approaches the black hole each time, the black hole pulls a little bit of the star away, accreting that part into the black hole. That accretion sends out a flare of light about three times the size of Jupiter each time. That flare – and the fact that it happened regularly – gave scientists their first clue that this was no ordinary space phenomenon.

Scientists have named the regular outbursts of light ASASSN-14ko, after the All-Sky Automated Survey for Supernovae (commonly called ASAS-SN), a network of 20 robotic telescopes headquartered at Ohio State. Data from ASAS-SN allowed Anna Payne, lead author of the paper and a NASA Fellow at the University of Hawai’i at Mānoa, to identify that something strange was happening inside that galaxy.

“Knowing the schedule of this extragalactic Old Faithful allows us to coordinate and study it in more detail,” Payne said. Payne and others confirmed the finding, and learned more about it, using data from NASA’s Neil Gehrels Swift Observatory and Transiting Exoplanet Survey Satellite (commonly called TESS).

The ASAS-SN network first detected the flare on Nov. 14, 2014. Astronomers initially suggested the outburst was a supernova, but a supernova is a one-time event. In early 2020, Payne examined all of ASAS-SN’s data on the galaxy and noticed a series of 17 flares spaced 114 days apart. Flares with any kind of regularity had never been seen before.

Payne and her colleagues predicted that the galaxy would flare again on May 17, 2020, so they coordinated joint observations with ground- and space-based facilities, including multiwavelength measurements with Swift. ASASSN-14ko happened right on schedule. The team predicted and observed flares on Sept. 7 and Dec. 26, 2020.

The team also used TESS data for a detailed look at a past flare. TESS observes swaths of the sky, called sectors, for about a month at a time. During the mission’s first two years, the cameras collected a full sector image every 30 minutes. These snapshots created a precise timeline of a single flare that began on Nov. 8, 2018, from dormancy to rise, peak, and decline.

“TESS provided a very thorough picture of that particular flare, but because of the way the mission images the sky, it can’t observe all of them,” Vallely said. “ASAS-SN collects less detail on individual outbursts, but provides a longer baseline, which was crucial in this case. The two surveys complement one another.”

Chris Kochanek, Ohio Eminent Scholar, astronomy professor at Ohio State and co-lead of the ASAS-SN project, said there is evidence that a second supermassive black hole exists in that galaxy.

“The galaxy that hosts this object is something of a ‘trainwreck’ consisting of two galaxies in the process of merging into one,” he said.

And while astronomers observed the eruptions recently, they actually happened about 600 million years ago. Because the galaxy is so far away, the light took that long to reach us.

“There was life on Earth, but it was all very primitive,” said Kris Stanek, a co-author on the paper and university distinguished professor of astronomy at Ohio State.

Astronomers classify galaxies with unusually bright and variable centers as active galaxies. These objects produce much more energy than the combined contribution of all their stars, which can include excesses at visible, ultraviolet and X-ray wavelengths. Astrophysicists think the extra emission comes from near the galaxy’s central supermassive black hole, where a swirling disk of gas and dust accumulates and heats up because of gravitational and frictional forces. The black hole slowly consumes the material, which creates low-level, random changes in the disk’s emitted light.

Astronomers have been searching for periodic emissions from active galaxies, which might signal theoretically suggested but observationally elusive cosmic phenomena. The 2020 Nobel Prize in Physics was awarded in part to astronomers studying the supermassive black hole in the Milky Way.

“In general, we really want to understand the properties of these black holes and how they grow,” Stanek said. Because the eruptions from this black hole happen regularly and predictably, Stanek said, “it gives us a truly unique opportunity to better understand the phenomenon of episodic mass accretion on supermassive black holes. The ability to exactly predict the timing of the next episode allows us to take data that we could not otherwise take, and we are taking such data already.”

ASAS-SN is supported by Las Cumbres Observatory and funded in part by the Gordon and Betty Moore Foundation, the National Science Foundation, the Mt. Cuba Astronomical Foundation, the Center for Cosmology and AstroParticle Physics at Ohio State, the Chinese Academy of Sciences South American Center for Astronomy and the Villum Fonden in Denmark.