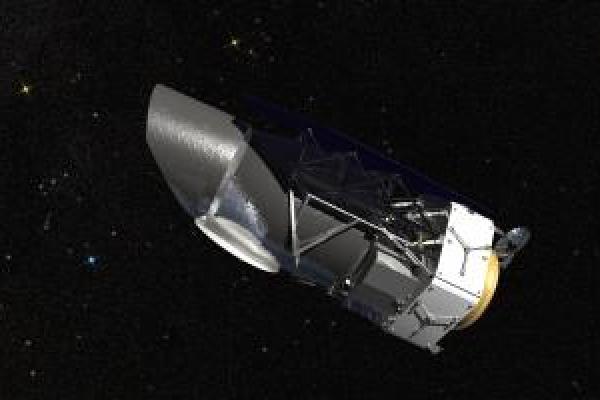 In the mid-2020s, NASA will launch a new space telescope that can map the Milky Way galaxy and the distant universe 100 times faster than the famed Hubble Space Telescope. Ohio State researchers Scott Gaudi, Chris Hirata and David Weinberg have played major roles in developing the current design of the Wide Field Infrared Survey Telescope (WFIRST), and over the coming decade they will help NASA refine the mission and prepare to analyze the extraordinary cosmic maps it will send back to Earth.

After several years of preliminary study, NASA announced its decision to move forward with WFIRST on February 18. Last December, NASA selected teams of top researchers from institutions around the country to contribute to the “formulation” phase of WFIRST, the critical years of final design work before construction begins.

With three leading members of WFIRST’s Science Investigation Teams, Ohio State has “the largest scientific footprint in WFIRST of any university in the country,” according to Weinberg, who is chair of the Department of Astronomy and professor of astronomy and physics. Weinberg and Hirata are co-investigators on the team designing WFIRST’s single largest program, an enormous map of hundreds of millions of galaxies that will be used to measure the growth of the universe and the clustering of dark matter.

“We’re hoping to figure out why the expansion of the universe is speeding up instead of slowing down, which is the biggest puzzle in cosmology today,” said Hirata, also a professor of astronomy and physics. “We’re used to gravity pulling things together, but on the scale of the universe, it is pushing things apart.”

The cause of this accelerated expansion could be a form of exotic “dark energy” that pervades otherwise empty space. Alternatively, Weinberg noted, “It could be that Einstein’s theory of gravity, despite its spectacular successes in describing the motions of planets and stars, just doesn’t work when we get to distances of billions of light years.”

WFIRST also aims to discover thousands of planetary systems around distant stars using gravitational microlensing, a search technique pioneered at Ohio State by Astronomy Professor Andrew Gould. Gaudi, who did his PhD thesis with Gould in the 1990s and is now Ohio State’s Thomas Jefferson Professor for Discovery and Space Exploration and professor of astronomy, has been appointed Principal Investigator of the WFIRST planetary microlensing team.

Microlensing requires the near-perfect alignment of two stars, so that the gravity of the foreground star focuses the light of the background star like a magnifying glass in front of a candle flame. A planet orbiting the foreground “gravitational lens” can be detected because it temporarily perturbs this magnification.

“Microlensing is currently the most sensitive method for finding planets in orbits from their parent stars that are further than that of the Earth," according to Gaudi, “but it relies on extremely rare alignments, so after many years of ground-based searches, we still have only a few dozen detected planets.”

Because of its wide field of view, its sensitivity to infrared light and the crystal-clear imaging possible from space, WFIRST is expected to detect thousands of microlensing planets, from gas giants like Jupiter to rocky planets like the Earth and Mars, including even hundreds of free-floating “rogue” planets — planets not orbiting any star.

“Those numbers allow us to answer questions that we just can’t address today,” said Gaudi. “What fraction of stars have planetary systems like our own? How many planets have been ejected from the systems where they were born and are now floating freely through interstellar space?”

Hirata began working on a predecessor to WFIRST while he was an assistant professor at the California Institute of Technology. The extraordinary range of his contributions helped convince Weinberg and John Beacom, professor of physics and astronomy and director of Ohio State’s Center for Cosmology and AstroParticle Physics (CCAPP), to recruit Hirata to Ohio State, where he now holds a joint appointment in the physics and astronomy departments.

“Chris has a more comprehensive understanding of WFIRST than anyone else on the planet,” Weinberg said, “because his expertise extends from the cosmological predictions that the mission is designed to test, down to the details of the telescope, the detectors and the spacecraft.“

Beacom is proud of the role that CCAPP has played in Ohio State’s cosmological prominence. “CCAPP funding helped us get a stake in many of the world’s most ambitious cosmology experiments, and to build an outstanding research group for theoretical interpretation of those experiments. With WFIRST, we are taking that leading position far into the future.”

NASA grants to the two science teams will send approximately $2 million dollars to Ohio State over the next five years, most of which will pay postdoctoral researchers who will work on mission design and developing methods to analyze WFIRST data. “It’s great to be able to do our part to make WFIRST happen, as well as to train the young scientists who are really going to lead the charge when WFIRST is up there a decade from now,” said Weinberg.

“Ohio State has made enormous contributions to WFIRST,” noted WFIRST Project Scientist Neil Gehrels of NASA’s Goddard Space Flight Center. “David Weinberg, Chris Hirata and Scott Gaudi are world experts in dark energy and exo-planets, which are its two main science areas.  After Hubble and the James Webb Space Telescope, WFIRST is going to be NASA’s next great optical and infrared observatory. It would not be moving forward without their seminal work.”

Image caption: WFIRST, shown here in an artist's rendering, will carry a Wide Field Instrument to provide astronomers with Hubble-quality images covering large swaths of the sky, enabling several studies of cosmic evolution. Its Coronagraph Instrument will directly image exoplanets similar to those in our own solar system and make detailed measurements of the chemical makeup of their atmospheres.