New evidence of how and when the Milky Way came together

New evidence of how and when the Milky Way came together 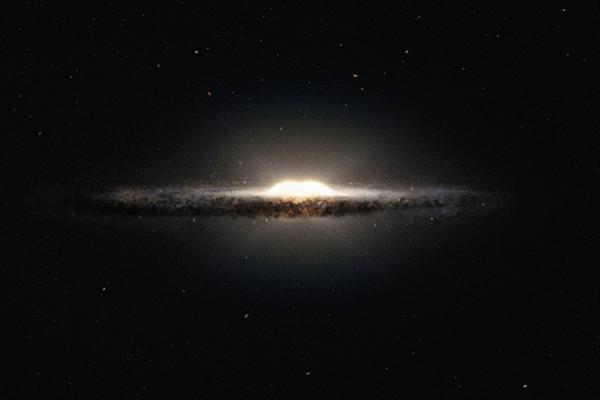 New research provides the best evidence to date into the timing of how our early Milky Way came together, including the merger with a key satellite galaxy.

Using relatively new methods in astronomy, the researchers were able to identify the most precise ages currently possible for a sample of about a hundred red giant stars in the galaxy.

With this and other data, the researchers were able to show what was happening when the Milky Way merged with an orbiting satellite galaxy, known as Gaia-Enceladus, about 10 billion years ago.

Their results were published today (May 17, 2021) in the journal Nature Astronomy.

“Our evidence suggests that when the merger occurred, the Milky Way had already formed a large population of its own stars,” said Fiorenzo Vincenzo, co-author of the study and a fellow in The Ohio State University’s Center for Cosmology and Astroparticle Physics.

Many of those “homemade” stars ended up in the thick disc in the middle of the galaxy, while most that were captured from Gaia-Enceladus are in the outer halo of the galaxy.

“The merging event with Gaia-Enceladus is thought to be one of the most important in the Milky Way’s history, shaping how we observe it today,” said Josefina Montalban, with the School of Physics and Astronomy at the University of Birmingham in the U.K., who led the project.

By calculating the age of the stars, the researchers were able to determine, for the first time, that the stars captured from Gaia-Enceladus have similar or slightly younger ages compared to the majority of stars that were born inside the Milky Way.

A violent merger between two galaxies can’t help but shake things up, Vincenzo said. Results showed that the merger changed the orbits of the stars already in the galaxy, making them more eccentric.

The researchers used several different approaches and data sources to conduct their study.

One way the researchers were able to get such precise ages of the stars was through the use of asteroseismology, a relatively new field that probes the internal structure of stars.

Asteroseismologists study oscillations in stars, which are sound waves that ripple through their interiors, said Mathieu Vrard, a postdoctoral research associate in Ohio State’s Department of Astronomy.

“That allows us to get very precise ages for the stars, which are important in determining the chronology of when events happened in the early Milky Way,” Vrard said.

The study also used a spectroscopic survey, called APOGEE, which provides the chemical composition of stars – another aid in determining their ages.

“We have shown the great potential of asteroseismology, in combination with spectroscopy, to age-date individual stars,” Montalban said.

This study is just the first step, according to the researchers.

“We now intend to apply this approach to larger samples of stars, and to include even more subtle features of the frequency spectra,” Vincenzo said.

“This will eventually lead to a much sharper view of the Milky Way’s assembly history and evolution, creating a timeline of how our galaxy developed.”

The work is the result of the collaborative Asterochronometry project, funded by the European Research Council.