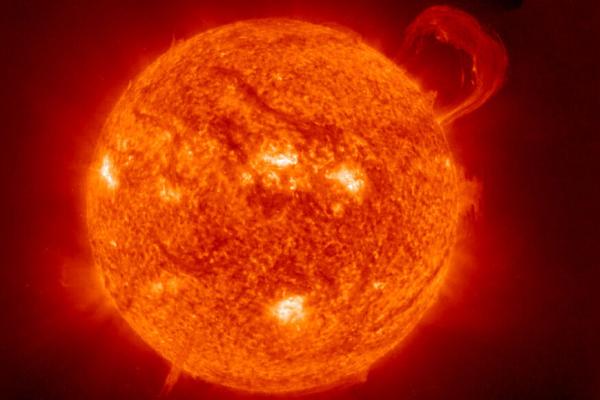 After two decades of debate, scientists are getting closer to figuring out exactly what the sun — and thus the whole universe — is made of.

The sun is mostly composed of hydrogen and helium. There are also heavier elements such as oxygen and carbon, but just how much is controversial. New observations of ghostly subatomic particles known as neutrinos suggest that the sun has an ample supply of “metals,” the term astronomers use for all elements heavier than hydrogen and helium, researchers report May 31 at arXiv.org.

The results “are fully compatible with [a] high metallicity” for the sun, says Livia Ludhova, a physicist at Research Center Jülich in Germany.

Elements heavier than hydrogen and helium are crucial for creating rock-iron planets like Earth and sustaining life-forms like humans. By far the most abundant of these elements in the universe is oxygen, followed by carbon, neon and nitrogen.

But astronomers don’t know exactly how much of these elements exist relative to hydrogen, the most common element in the cosmos. That’s because astronomers typically use the sun as a reference point to gauge elemental abundances in other stars and galaxies, and two techniques imply very different chemical compositions for our star.

One technique exploits vibrations inside the sun to deduce its internal structure and favors a high metal content. The second technique determines the sun’s composition from how atoms on its surface absorb certain wavelengths of light. Two decades ago, a use of this second technique suggested that oxygen, carbon, neon and nitrogen levels in the sun were 26 to 42 percent lower than an earlier determination found, creating the current conflict.

Another technique has now emerged that could decide the long-standing debate: using solar neutrinos.

These particles arise from nuclear reactions in the sun’s core that turn hydrogen into helium. About 1 percent of the sun’s energy comes from reactions involving carbon, nitrogen and oxygen, which convert hydrogen into helium but do not get used up in the process. So the more carbon, nitrogen and oxygen the sun actually has, the more neutrinos this CNO cycle should emit.

In 2020, scientists announced that Borexino, an underground detector in Italy, had spotted these CNO neutrinos (SN: 6/24/20). Now Ludhova and her colleagues have recorded enough neutrinos to calculate that carbon and nitrogen atoms together are about 0.06 percent as abundant as hydrogen atoms in the sun — the first use of neutrinos to determine the sun’s makeup.

And though that number sounds small, it’s even higher than the one favored by astronomers who support a high-metal sun. And it’s 70 percent greater than the number a low-metal sun should have.

“This is a great result,” says Marc Pinsonneault, an astronomer at Ohio State University in Columbus who has long advocated for a high-metal sun. “They’ve been able to demonstrate robustly that the current low-metallicity solution is inconsistent with the data.”

Still, because of uncertainties in both the observed and predicted neutrino numbers, Borexino can’t fully rule out a low-metal sun, Ludhova says.

The new work is “a significant improvement,” says Gaël Buldgen, an astrophysicist at Geneva University in Switzerland who favors a low-metal sun. But the predicted numbers of CNO neutrinos come from models of the sun that he criticizes as too simplified. Those models neglect the sun’s spin, which could induce mixing of chemical elements over its life and change the amount of carbon, nitrogen and oxygen near the sun’s center, thereby changing the predicted number of CNO neutrinos, Buldgen says.

Additional neutrino observations are needed for a final verdict, Ludhova says. Borexino shut down in 2021, but future experiments could fill the void.

The stakes are high. “We’re arguing about what the universe is made of,” Pinsonneault says, because “the sun is the benchmark for all of our studies.”

So if the sun has much more carbon, nitrogen and oxygen than currently thought, so does the whole universe. “That changes our understanding about how the chemical elements are made. It changes our understanding of how stars evolve and how they live and die,” Pinsonneault says. And, he adds, it’s a reminder that even the best-studied star — our sun — still has secrets.

Questions or comments on this article? E-mail us at feedback@sciencenews.org

Borexino collaboration. Improved measurement of solar neutrinos from the carbon-nitrogen-oxygen cycle by Borexino and its implications for the standard solar model. arXiv:2205.15975. Submitted May 31, 2022.

The original article can be found on the Science News website and is located here.

Image Credit: Made mostly of hydrogen and helium, the sun also has heavier elements such as carbon and nitrogen. But scientists disagree just how much of those heavier elements there are. SOLO/ESA AND NASA