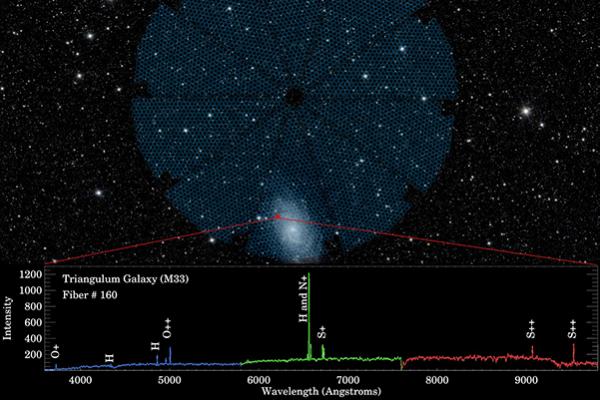 Astronomers test fiber-optic experiment that attempts to understand why the universe's expansion is accelerating
For the last 20 years, astrophysicists have tried to understand dark energy, an unseen phenomenon that is causing the expansion of the universe to accelerate.

Last week, they turned 5,000 fiber-optic "eyes" toward the skies, the first test of a five-year project to try to solve the mysteries of dark energy.

The eyes – a robotic array called "DESI," the Dark Energy Spectroscopic Instrument – are mounted on top of a telescope in Arizona. They are designed to automatically point at 35 million galaxies throughout the universe, gather their light, and then analyze that light to precisely map the galaxies' distance from Earth. The calculations will allow scientists to gauge how far the universe has expanded as light traveled to Earth.

"I was overjoyed to see the first spectra obtained with DESI," said Paul Martini, DESI's instrument scientist, a member of the DESI leadership team and an astronomy professor at The Ohio State University. "It is the next step toward understanding dark energy and why the universe's expansion is accelerating."

DESI is housed at Kitt Peak National Observatory near Tucson, and is a project led by the U.S. Department of Energy. But astronomers from Ohio State played a major role in its development – and will continue to play a major role throughout its operation.

As instrument scientist, Martini managed the testing and integration of the various pieces of equipment to create DESI. That work included a group in Ohio State's Department of Astronomy, which designed and built many parts of DESI's 10 spectrographs. These instruments record the light from distant galaxies millions to billions of light years away.

Klaus Honscheid, a professor in Ohio State's Department of Physics, is the DESI system scientist, and designed the software that keeps the instrument operating – what he called the "central nervous system" of the entire experiment. Researchers and graduate students from Ohio State's Center for Cosmology and AstroParticle Physics made major contributions to the project, creating software, analyzing data, working on the fiber optic positioning system, and helping design many parts of the spectrographs, including a special thermal enclosure, a commissioning instrument, and a sky monitor camera.

DESI is a massive project, built on top of the largest of the 22 optical telescopes at Kitt Peak National Observatory. The 5,000 fiber optic "eyes" are arranged over an area that covers 8 square degrees of the sky. Each eye has its own robotic positioner, and each positioner is automatically positioned to look at a sequence of individual galaxies and quasars. That many moving parts requires careful choreography to ensure no two pieces bump into one another, disrupting the whole thing. That's where Honscheid's work comes in.

The system officially is set to start collecting data in early 2020, and operate for five years, scanning the skies to build a 3D map of the galaxies in an attempt to quantify how quickly the universe is expanding.

The discovery that the universe is not only expanding but accelerating in its expansion was startling – the kind of scientific discovery that upends what scientists consider basic, fundamental knowledge. Two teams of astronomers first reported this phenomenon in 1998, and when they did, it ran counter to everything astronomers had thought to be true about the size of the universe.

But that is not the case. Galaxies, astronomers learned back in 1998 and confirmed again and again in the 21 years since, are actually moving farther away from each other, at an increasing speed. It seems counterintuitive: Gravity should be pulling on everything in the universe, so how can the expansion be speeding up?

"Imagine you threw a ball up in the air and instead of it slowing down and falling back to the Earth, it flew upward faster and faster," Martini said. "That is how weird the universe is behaving."

But if the universe is everything, to where could it expand?

"Imagine if you were a two-dimensional person, living on the surface of a balloon that was inflating – that universe would be expanding into a three-dimensional space, but it would be outside the scope of what you understood on your two-dimensional world," Martini said. "Perhaps a dimension that we don't yet know about, that we can't yet understand."

A galaxy is big, made up of billions of stars. In order to start trying to understand what dark energy is or why it is causing the universe to expand, scientists first need to be able to measure the distance between galaxies, and calculate how fast they are growing away from one another. This is exactly what DESI was designed to do.

DESI will build a 3D map of the universe, including some 35 million galaxies and 2.4 million quasars – very remote objects in space that emit very large quantities of energy. Some scientists think quasars might be a stage in a galaxy's evolution, and that they might contain multiple black holes.

DESI's test today was a major milestone. For the first time, the scientists used the instrument to collect light from these far-distant celestial bodies to make sure the system works.

"Eventually, that light will become data that could help us understand dark energy and how it works," Honscheid said.