A diversity of worlds: Exoplanet hunter keeps his eyes on the sky

A diversity of worlds: Exoplanet hunter keeps his eyes on the sky 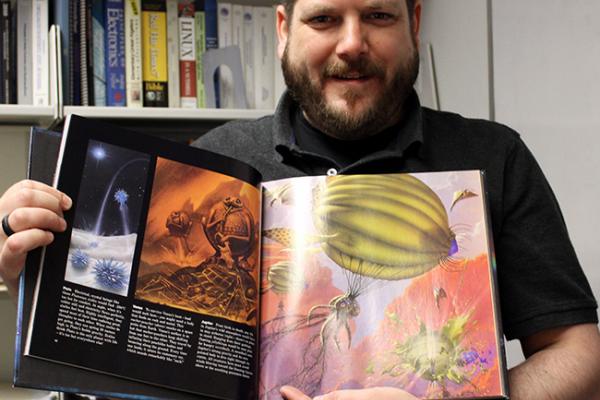 "I’ve always been a geek and a nerd,” says astronomy professor Scott Gaudi, recalling a time when his second grade teacher assigned his class to memorize the planets in order of distance from the sun. He went home and read an entire National Geographic picture atlas titled “Our Universe.” “I aced the homework assignment, no doubt, and I was hooked.”

What really struck Gaudi, the Thomas Jefferson Professor for Discovery and Space Exploration and vice chair of the Department of Astronomy, about the book was the idea of extraterrestrial life.

“There was a chapter on what life might look like on other bodies in the solar system,” Gaudi said, citing illustrations of creatures with giant ears so they could hear in Mars’ thin atmosphere and blimp-like beings that could float through existence in clouds on Jupiter.

Fast forward to today, and Gaudi still has his eyes on the sky. The award-winning astronomer has become a leader in the discovery of distant worlds — planets outside our solar system, known as exoplanets — through tireless research, education and advocacy.

Right around the dawn of the first exoplanet discoveries in the 1990s, Gaudi and Professor Emeritus Andrew Gould helped develop one of the main methods scientists use today to find other planets, called gravitational microlensing. This technique relies on extremely rare alignments between two stars, in which the light of the background star is pulled and warped around the star in front of it due to gravity. A planet orbiting the foreground star temporarily disturbs the warped light from the background star, allowing astronomers to detect it.

Due to its high sensitivity, gravitational microlensing can identify lower-mass planets like Earth around dim and distant stars, and it’s currently one of the only ways to detect planets in other galaxies. But because it relies on exceptionally rare phenomena, the best way to use it is by monitoring as many stars in the sky at once.

“If you looked at one star for 500,000 years, you might be lucky enough to see one of these chance alignments, and that’s a long time compared to the time it typically takes a graduate student to get their PhD,” Gaudi said, laughing. “So instead of doing that, we look at a hundred million stars on a regular basis.”

Gaudi has been involved in the discovery of more than 50 exoplanets, using both gravitational microlensing and the better-known transit method, which detects planets when they pass in front of and cast a shadow on their host star.

“Exoplanets are now found every day, which is amazing to me because I remember when I used to be able to name all of the known exoplanets,” Gaudi said. “I’ve been lucky to be part of that journey, from a field going from nothing, where we just knew about our solar system, to now knowing about this enormous diversity and complexity of planetary systems around other stars.”

After nine years in deep space collecting data that revealed our night sky to be filled with billions of hidden planets — more planets even than stars — NASA’s recently retired Kepler space telescope leaves a legacy of thousands of planet discoveries outside our solar system, many of which could be promising places for life. Credit: NASA/Ames Research Center/W. Stenzel/D. Rutter.

What scientists have learned from more than 4,000 exoplanet discoveries is that planets are as diverse as humans — sure, there are some common traits, but each one is unique.

So far, the most abundant planets astronomers are seeing in the Milky Way are super-sized Earths and mini Neptunes, Gaudi said. But there have also been some pretty bizarre outliers. 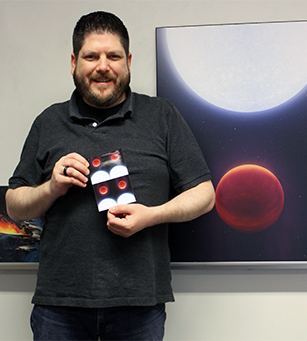 One of those is also Gaudi’s favorite planet: KELT-9b, which Gaudi and his team discovered in 2017. The planet’s shockingly unusual properties threw them for such a loop they thought they had done something wrong. The Jupiter-like planet is the hottest gas giant exoplanet known, with a toasty temperature of about 7,600 degrees Fahrenheit — hotter than most stars and only 2,300 degrees cooler than the sun.

“We spent years trying to disprove that this was actually a planet because we thought it was so weird,” Gaudi said. “If I gave you the challenge of making up the weirdest planet in the universe, I would bet you’d have a hard time coming up with something weirder than this.”

He proudly keeps “baby pictures” of KELT-9b in his wallet, thanks to a gift from a former graduate student, and the planet recently enjoyed celebrity status as champion of the 2018 “Exocup,” a March Madness-style bracket in which exoplanets compete and advance based on public interest.

Astronomy brings us out of ourselves, so that we're not just living on this big pile of work; the third rock from the sun — that there's more than all that. And I think that's really important — just keeping people excited about what it means to be human and to be interested and explorers, which we all are at heart."

The most advanced telescopes (not) on Earth

Gaudi has had hands in pretty much every major exoplanet-finding telescope mission, including the recently retired Kepler space telescope (responsible for finding thousands of exoplanets, more than any other project) and the Ohio State-developed Kilodegree Extremely Little Telescope (KELT).

Developed by an Ohio State graduate student in 2006, KELT is a small telescope that uses the transit method. KELT’s small size and low sensitivity allows it to look at stars that are 100 to 10,000 times brighter than what larger telescopes can observe, meaning it can discover planetary systems with host stars bright enough to analyze their atmospheric content.

Gaudi is also the principal investigator of the Wide Field Infrared Survey Telescope’s (WFIRST) microlensing component, which is expected to identify as many as 1,400 new exoplanets.

NASA’s next flagship telescope following the James Webb telescope, the Wide Field Infrared Survey Telescope (WFIRST), will have the same sensitivity as the Hubble Space Telescope and survey 100 times more of the sky. The mission “will give us a complete census of exoplanets in our galaxy with a mass or radius greater than the Earth,” says Gaudi, who is principal investigator of WFIRST’s microlensing component. In addition, the Department of Astronomy’s Chris Hirata and David Weinberg are co-leading WFIRST’s dark energy science team, giving Ohio State a larger footprint in the project than any other institution with the accompanying NASA grants totaling millions. Credit: NASA.

"For WFIRST we are looking at hundreds of millions of stars for about 400 days and expect to find about 50,000 microlensing events,” Gaudi said. “By combining this with Kepler, this will give us a complete census of exoplanets in our galaxy with a mass or radius greater than the Earth.”

WFIRST will also test new technology, an instrument called a coronagraph, which will enable scientists to directly image nearby Jupiter-sized planets for the first time by blocking the light of a star to look for planets around it.

Additionally, Gaudi is co-chairing a potential future Habitable Exoplanet Observatory (HabEx), which could become NASA’s priority mission of the 2030s. HabEx would utilize even more advanced technology than WFIRST, giving it the ability to directly image and characterize Earth-like planets around sun-like stars, potentially looking for evidence of life. This would particularly be made possible with a “starshade,” a device shaped like a sunflower the size of a baseball diamond, to be launched in front of the telescope to block the light from a star while still allowing light from planets to come through. 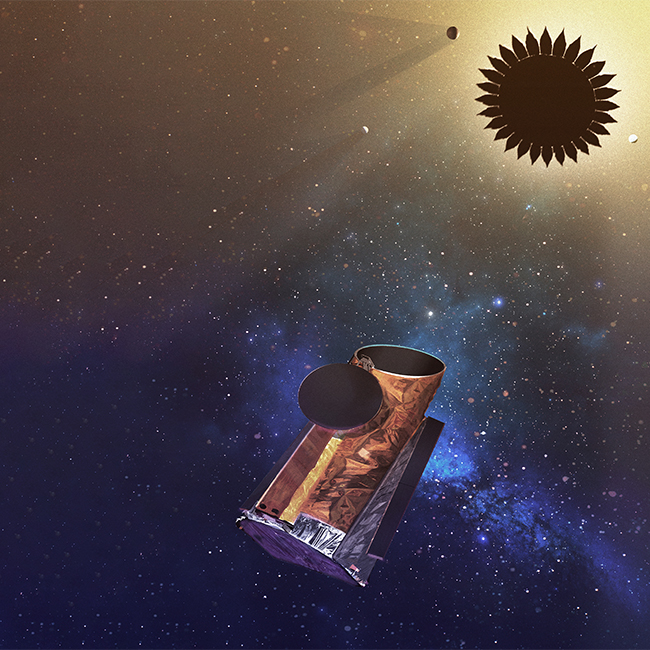 The Habitable Exoplanet Observatory (HabEx) would employ a flower-shaped device called a “starshade” that would be launched in front of the telescope, allowing it to directly image and assess Earth-like planets around sun-like stars. Ohio State astronomers are playing key roles in three of these four projects: HabEx (Scott Gaudi), the Large Ultraviolet Optical and Infrared Surveyor (Bradley Peterson) and the Lynx X-ray Observatory (Laura Lopez). Artist’s conception: Joby Harris, NASA/JPL-Caltech.

“You have to wrap it up, launch it in a rocket and it has to unfurl to the precision of about a millimeter, and it has to be aligned to the telescope to about a meter,” explained Gaudi, adding that the starshade is being developed and tested at NASA’s Jet Propulsion Laboratory in Pasadena, California. “All of this sounds super hard, and it is, but the amazing thing is that we’ve been working on this technology for over a decade and we’re getting there.”

The mission is one of four potential projects being studied by NASA in preparation for the 2020 Astronomy and Astrophysics Decadal Survey, issued by the U.S. National Research Council to determine funding priorities within astronomy and astrophysics. Hubble, James Webb and WFIRST were each initiated through this process, and the results of the 2020 survey are expected to be released in early 2021.

“Now, for the first time, we have the technology and the scientific knowledge to actually go out and try to realize the dream that started when I read that book,” Gaudi said. “Something that used to be science fiction and a province of Hollywood or late-night discussions over beer is now a scientific endeavor, and it’s great for all of us to be alive during that time.”

Gaudi also considers himself an accidental “astropolitician,” leading various NASA workgroups and speaking with legislators and policymakers to advocate for the importance of funding space missions and astronomy research. 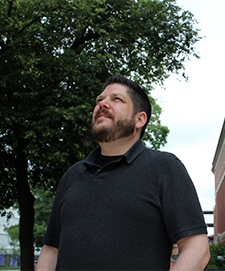 He recently co-chaired a national committee charged by Congress to define long-term strategies for exoplanet research, and he’s made multiple trips to Capitol Hill to speak with legislators about the significance of WFIRST and exoplanets to Ohio State and the world at large.

“It’s a hard argument to make, because there are lots of other things we could be funding that are more practical, but I would argue — I’m a little biased, obviously — that astronomy is important for our society,” Gaudi said. “It brings us this sense of wonder; this idea that human beings can go and explore the universe.”